- October 01, 2018
Heya guys! Back again with another monthly update! This month has been quite busy for me with both commissions, getting a new job, getting a vehicle, and getting ready to move out, but work got done none the less!

Due to the engine originally being used for Southpaw not being strong enough to handle all the frames of animation, quality, and resolution size of the assets of the game, I've decided that development for the game can no longer be done in that engine. After starting to put in Blu E's finalized animations, the game ran into a similar issue I had before separating the round intermissions into their own level file: Flickering/disappearing visuals and assets.

From this point on, AKB: Southpaw is now being developed in Unity with C# coding. Since I am not a coder by nature, this transfer is going to be quite difficult, but so far it's proven to definitely be possible. In light of this, the Demo for Southpaw has been pushed back to an unknown date, and I highly doubt the game will be done within the year long development window I initially forecasted.

Now you may be thinking to yourself "What a waste of a perfectly good engine core! How can you just toss aside something that's still fully functional and not simply work with the limitations?", and to that I say: You're absolutely right, and you'll be happy to know that I'll still be using the original AKB core I made in Clickteam Fusion 2.5 for something else to tide you guys over!

20 years before AKB: Southpaw, Bullen Beisser (Devon's Coach) shocked the world with his out of the blue boxing skills, marking him as one of the greatest boxers of animal kind. AKB: Underdog takes you back to the retro days where humans were on top, and the heat between them and animal folk had risen to dangerous heights. In a sport considered a national passtime for both races, a spark of change would rise up, with two boxers at the base of it all. 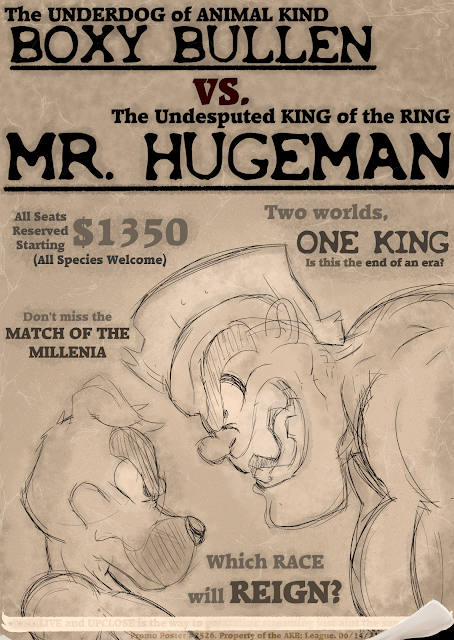 AKB: Underdog will play exactly like AKB: Southpaw, but with both new and old fighters from that era! It also has a look you may find familiar to a certain NES game

Since all that was required to make this was a visual overhall of the old assets, AKB: Underdog should have a playable demo sometime this October!

By the way, if you haven't seen it around my art posting areas, AKB themed colored sketch commissions are now on sale starting at $40! An OC versus a character from the series, like Devon or Blu E! These commissions help fund Southpaw and Underdog's development, as well as keep me alive! (I can't very well make a game if I'm dead)
Normal sketch commissions of the same type are also available now, starting at $20!
More rules and info for commissions on my HIRE ME page! 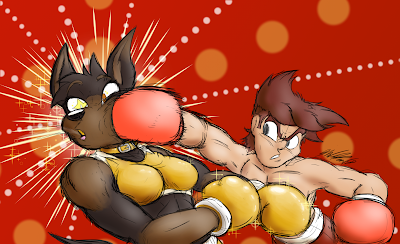 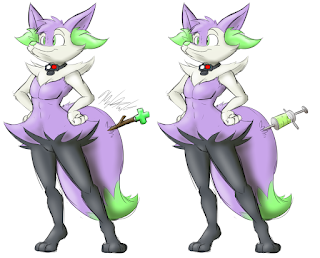 That's all I've got for now! Unfortunately I was too busy with AKB to do anything Diggy Huskey related, but since I'm now working on 2 AKB games I don't think I'll have much to post in that regard until Underdog is released. See ya next time!

Popular posts from this blog

Some of you may not know this, but I've been posting game development progress for AKB: Southpaw, my Punch-Out inspired game with animal stereotypes instead of cultural ones (but still some cultural stereotypes), as well as a new Diggy Huskey game on my main and art twitter over the past 2 months or so. Since they've been minor additions each time, I didn't feel it necessary to make a journal for each one, so I've now decided I'll be showing all the progress so far in monthly updates! AKB: Southpaw As it stands, the game is currently in a playable state! I'm working on making the final assets for Blu E's fights such as Blu E's sprites, the ring, the ref, the portraits, ect. There's a few placeholder assets still visible in this presentation, so expect some things to change in the final version. I originally planned on making the animations  smooth and completely frame-by-frame, but I quickly realized this would be too much work for more
Read more

- July 04, 2019
Hello everyone! Shortly after the game's April Fools demo was dropped, I began lose all motivation for making the game for a large period of time, practically the entire last 3 months, due to personal reasons and the way I was worried people saw the game. However, I can safely say that said feelings are mostly behind me now, and I've found new joy in working on the game on my own and being more quiet about the game's development, letting me fully enjoy the progress in my own time! I've spent the past week or two working on the game, and have now gotten it to the point where it's full demo (the entire first circuit) is JUST about ready to be released! However, due to recent events and commissions that needed time priority to attend to, I unfortunately couldn't finish everything I needed to for the demo by the 4th of July, the original intended release date of the game. That said, I only need to finish tweaking the fights a bit, making some menu and UI stuff, an
Read more