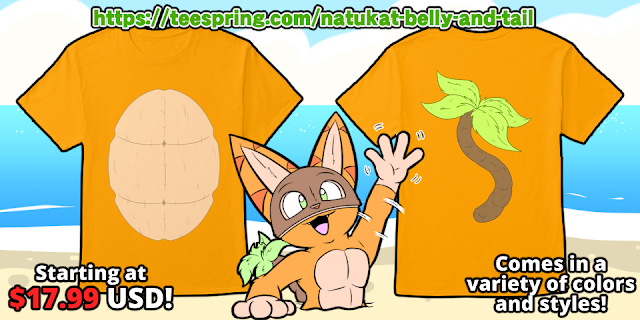 The Natukat Belly and Tail design for Men and Women's t-shirts, tanktops, sweaters, and baby clothing are now available in a large variety of colors and styles! You can get your own on my TeeSpring store here starting at $17.99 usd Head to the store to claim your own!
Post a Comment
Read more

- July 04, 2019
Hello everyone! Shortly after the game's April Fools demo was dropped, I began lose all motivation for making the game for a large period of time, practically the entire last 3 months, due to personal reasons and the way I was worried people saw the game. However, I can safely say that said feelings are mostly behind me now, and I've found new joy in working on the game on my own and being more quiet about the game's development, letting me fully enjoy the progress in my own time! I've spent the past week or two working on the game, and have now gotten it to the point where it's full demo (the entire first circuit) is JUST about ready to be released! However, due to recent events and commissions that needed time priority to attend to, I unfortunately couldn't finish everything I needed to for the demo by the 4th of July, the original intended release date of the game. That said, I only need to finish tweaking the fights a bit, making some menu and UI stuff, an
Post a Comment
Read more

The AKB Underdog Alpha Demo is OUT NOW!!

AKB: Underdog's Alpha Demo is NOW AVAILABLE to download on Gamejolt and Itch.io !! Please feel free to give me any feedback or questions you may have!! Gamejolt Download Itch.io Download (note: The demo is only playable on windows at the moment, a mac release will be posted within the coming week) For those wondering why there was no monthly update for October, this is why! I put all my effort into releasing the demo, and am proud to say I've begun working on the full game and that the OST has been finished.
Post a Comment
Read more

Heya guys! Back again with another monthly update! This month has been quite busy for me with both commissions, getting a new job, getting a vehicle, and getting ready to move out, but work got done none the less! AKB: Southpaw   Due to the engine originally being used for Southpaw not being strong enough to handle all the frames of animation, quality, and resolution size of the assets of the game, I've decided that development for the game can no longer be done in that engine. After starting to put in Blu E's finalized animations, the game ran into a similar issue I had before separating the round intermissions into their own level file: Flickering/disappearing visuals and assets. From this point on, AKB: Southpaw is now being developed in Unity with C# coding. Since I am not a coder by nature, this transfer is going to be quite difficult, but so far it's proven to definitely be possible. In light of this, the Demo for Southpaw has been pushed back to an unknown d
Post a Comment
Read more

Some of you may not know this, but I've been posting game development progress for AKB: Southpaw, my Punch-Out inspired game with animal stereotypes instead of cultural ones (but still some cultural stereotypes), as well as a new Diggy Huskey game on my main and art twitter over the past 2 months or so. Since they've been minor additions each time, I didn't feel it necessary to make a journal for each one, so I've now decided I'll be showing all the progress so far in monthly updates! AKB: Southpaw As it stands, the game is currently in a playable state! I'm working on making the final assets for Blu E's fights such as Blu E's sprites, the ring, the ref, the portraits, ect. There's a few placeholder assets still visible in this presentation, so expect some things to change in the final version. I originally planned on making the animations  smooth and completely frame-by-frame, but I quickly realized this would be too much work for more
Post a Comment
Read more 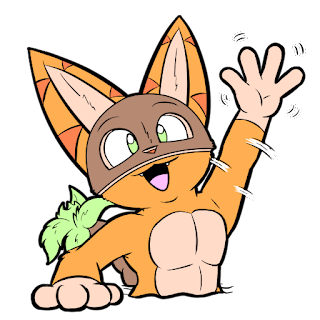 Howdy there! My name's Mason C. Hardison, or more commonly known as "Chaoko"! After 5 years of making art on and for the internet I finally decided "ya know what, maybe I should make myself a site so people who don't pay attention to me in one place but do another won't have an excuse for not noticing something I put in the place I don't look", because here is where EVERYTHING is located and will be put, if not at least link to everything else!   As of this post, the site is still under construction, and new areas will be added the more work I do. Check back here every now and then if ya wanna see what's new with me, or do that subscribing thing this site has. I don't know how it works, I think it's through email? I guess if you do that they'll just keep putting me in your mailbox or something, not sure why you'd want that but the option is there.   Also, the cat you see above is my mascot the Coconut Cat, but people have
Post a Comment
Read more